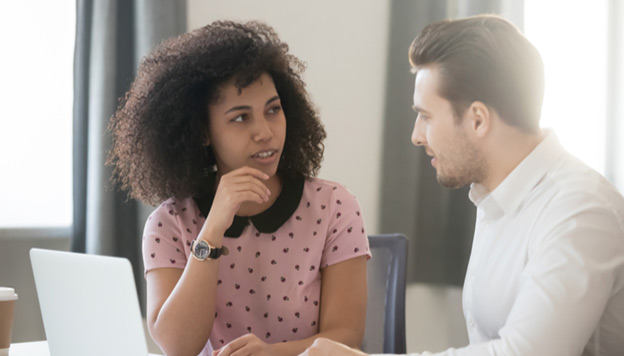 How Does Feedback Help Us?
Imagine a salesman who missed a few targets, and now he risks losing his job. Thanks to feedback in the form of metrics, he can find out how to change his sales approach, make more of the clients he has, or find better leads. Within organizations, feedback can appear in many forms – from KPIs (key performance indicators), which is probably the most known type of feedback, to conversational feedback, which may occur during a simple talk over a cup of coffee. It all counts. Thanks to feedback, we can improve ourselves and our organizations, keeping both alive and well.

Most employees in the workplace want to develop in their job. However, about a third of them report that don’t receive the feedback they need to improve. Typical feedback discussions are not that pleasant. Employees are fearful of them because criticism can feel like an attack on their credibility and status. Managers are afraid of them because they often don’t know what kind of feedback employees need or want.

The Culture of Being Nice
Why is everybody so anxious about giving and receiving feedback? It is difficult to be critical of others because of the influential culture of being kind to people. When giving out feedback, we don’t want to offend the receiver, while those receiving it feel pressure to be kind during the conversation. Being very nice and not constructive doesn’t help anyone because both parties feel awkward during the whole feedback experience. As a result, we get many polite statements but few positive suggestions for improvement.

According to recent research, people who are asked to provide feedback unsolicited are much friendlier (and their feedback much more positive) and open than those who were asked to give it. Therefore, the best way to avoid overly cute smiles and politically correct conversations is to ask for feedback directly. When you do that, you are virtually licensing your superiors or peers to be critical of you, and that permission is crucial. As a result, you will get a more constructive and honest critique.

The Culture of Asking for Feedback
Organizations can direct their culture toward continuous progress and improvement by switching from providing feedback to asking for it. Giving negative feedback to a person who didn’t ask for it may feel like you’re telling them things that they care about, but they stop listening to you.

To achieve the minimal threat response, people should ask for feedback because in those cases both parties are in a state of psychological safety (which is crucial during feedback conversations.) Those who ask, feel like they are in control of the situation, they have greater certainty and autonomy as they can steer the discussion where it will be most useful. If leaders manage to instill and maintain this behavior, they could quickly build an open-feedback culture and would tackle more difficult challenges.

Persona.fit is an app that allows people from all levels in the organization to get broader feedback. It reduces the chances of receiving biased feedback, and that kind of constructive criticism will reflect one’s performance much better. It will lead the organization to continuous improvement, better decision making, and stronger teams.

5 Characteristics of Leaders in the Digital Era

Continuous Feedback: You grow. We grow.

Feedback: How to Give It Properly